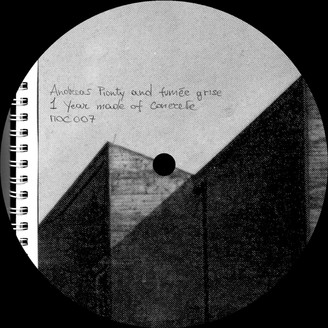 One Year Made Of Concrete Andreas Pionty & fumée grise

Play All 12"
The one year celebratory release of MOC sees label heads Andreas Pionty and fumée grise bringing forth a new concept that sheds light on the imprint’s musical direction. The release consists of an attentive selection of four tracks out last year, that were given the remix treatment.

Gathaspar’s celestial ‘The Lover Of Ursa Major‘ is the first to get reworked. Andreas Pionty keeps the main focus on the vocals and adds extra bass and zippy synths, turning it into a high paced, relentless piece of techno goodness. The mysterious mood on the dubby ‘Boyz Weekend‘ is turned down to a minimum, making headway for a more rapacious, dancefloor oriented take.

fumée grise brings back the eerie factor, starting with his ‘Haunted Forest Remix’ of one of MOC’s first ever releases - Steven Cock’s ‘Fusion‘. Stripped down of its more playful bell accents, the remix goes into a dark and deep territory, as the name suggests. Lastly, Gathaspar’s sub-bassy ‘Gathsoland‘ gets taken down a notch, downplaying the original kick but still centering around the addictive vocal sample.