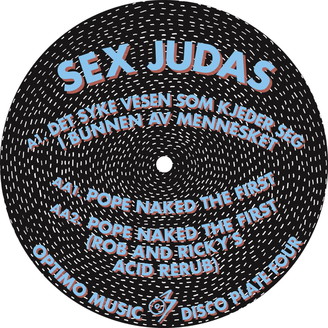 Play All 12"
We are very pleased to announce the fourth Optimo Disco Plate. What was only really ever meant to be an imprint for a one-off release appears to have developed into a fully fledged label in its own right. Sex Judas delivers the latest Disco Plate, and while I attempt to work out how to pronounce the title of the A1 track on this EP, I'll let him tell you a little about himself and this release.

“Sex Judas feat. Ricky started up a few years ago to channel an anonymous Norwegian producer’s love for comics, political satire, music history, eroticism and above all electronic music. Imagine Damon Albarn’s “Goriliaz” project on acid or the musical versions of The Fabulous Furry Freakbrothers on, well whatever they are on. Portrayed as a classic twosome, infant terrible, Sex Judas and his trusted sidekick Ricky come across as some kind of musical nomads with a hippy take on life. Musically it’s all over the place, but the essence of jamming and the love for African American music shines thru. Inspiration is taken from German psychedelic rock, deep southern disco, rhythm and blues, classic house and techno, also taking a key from the avant-garde.

So, what’s cooking? Fresh from finishing his trilogy of ep’s on Tim Paris Marketing Music, Sex Judas moves on to Optimo’s Disco plate series with a golden slice of deep modern disco.

“Pope naked the first” steps up the energy level a notch. Over a modern piece of rhythm and blues, tongue in cheek Judas and Ricky imagines the Pope strolling down the street with his Siamese gato sucking on a gelato.

And look, you even get Rob and Ricky’s acid rerub thrown in for good measure. This 12" comes with a special 12 x 12 printed insert.”