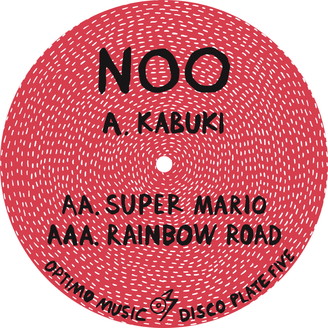 Play All 12"
Noo are Daze Dasen (aka Plastique De Reve) and Sami Liuski (aka Bangkok Impact / Putsch '79. They return with their third 12" and the fifth in the Optimo Music Disco Plate series. NOO pursue their channeling of the disco noosphere with a new EP inspired by YMO, Kabuki opera, video games, animation movies… everything Japan. The title track “Kabuki” is based on the traditional Kabuki and Noh theatre, blending Taiko drums and mystic flutes with futuristic synths and samples from crazy TV ads and space kung-fu series with masked half-robots in pyjamas and holographic princesses floating in the sky. The song tells the traditional tale of ‘The Death of Atsumori’, a young Samurai killed in single combat. The word ‘Kabuki’ literally means sing (âÃ), dance (ïë), and skill (äÍ).

“Super Mario” is a tribute to Nintendo video games, science fiction and Ghibli animation movies, and the geniuses behind the synth-fueled Tinseltown Neo Tokyo electro-disco-pop of the one and only Yellow Magic Orchestra. Japanese gentlemen, stand up please!

“Rainbow Road” is a more intimate, atmospheric track, made with sounds and outtakes from the previous track. No beats, but waves of glittering synths and lonely vocoders rising and crashing to create the perfect soundtrack for the mind-bending final level of the Super Mario Kart game that bears the same name. Kawaiii !!