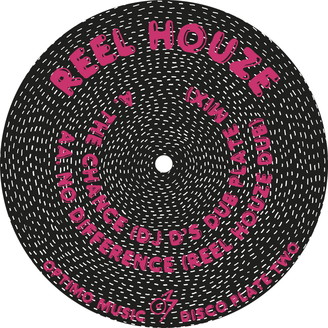 Play All 12"
Following on from the summer hit that was Noo's Optimo Disco Plate one, we are delighted to present the second plate, this one an archival release from London's Reel Houze. Reel Houze are/were Dominic Dawson and Rob Mello, and these two tracks were originally released in 1996. Big with Twitch at the time, he dug out "No Difference" again last year and started playing it once more and then did the same with "The Chance". They felt and sounded timeless so it seemed a good idea to make these Dub Disco wonders available again to a new generation.

'The Chance" is based on a sample form Dinosaur L's "Go Bang". It is nearly 11 minutes of dubbed out disco madness featuring one of thee all time greatest Moog solos, played live by Rob Mello. DJ Harvey gets frenetic on the percussion (he's playing a toilet seat!). It's loose, it's a little debauched and is further proof that disco music can be out there, wild, modern and any tempo it goddamn wants to be.

"No Difference" is the closest thing we can imagine to Basic Channel doing disco. Loose, long, extremely dubbed out and mesmeric, in the right hands it is swinging, sexy club hypnotiser.