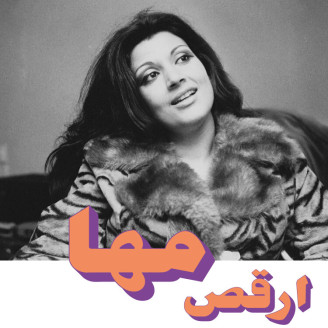 Play All CD
Maha’s “Orkos” immediately catches your ear as a unique album. A strong and energetic voice, equally grounded in jazz as well as Egyptian vocal traditions, Maha sings over instrumentals that offer a wide palette of influences, sonically emblematic of the cultural changes that were occurring in the country. The album features rich compositions and productions by renown Egyptian musician Hany Shenoda, who’s group, Al Massrieen, Habibi Funk worked with in 2017 (the release led to sync placements in Hulu’s “Ramy” TV Series).

At the time of its release, however, the “Orkos” cassette quickly faded away among the growing number of releases populating the Egyptian musical soundscape. For more than 40 years, it sat in near obscurity before being given new life in the form of a properly licensed vinyl release. Habibi Funk and Disco Arabesquo are honored to play a part in sharing Maha’s story. Below is a bit more context around the release as well as the campaign schedule.

The arrival of the cassette brought a seismic shift in how music was produced and consumed around the world. Smaller bands and labels were able to release music without the logistical and financial barrier present in vinyl manufacturing. At the same time, in Egypt, a new crop of musicians and composers made their way into the scene, seeking to bring something fresh to what was perceived as the widely monophonic musical traditions of Egypt. Hany Shenoda, Mohamed Mounir, Magdy El Hossainy, Omar Korshid, Salah Ragab and Hamid El Shaeri are some names that come to mind. Many built their sounds combining their own musical upbringing with influences coming from the outside. The success of these projects varied widely, but for each there were numerous lesser-known bands and singers. Many of these often-short-lived projects would release their music on cassettes on tiny labels only to fade into the musical ether.

Maha’s “Orkos” album fits this category. Put out in a small run of cassettes, it’s fair to say that the singer’s sole recording outing was not a financial success when it was originally released by Egyptian label Sout El Hob in 1979. While it may not have found an engaged and open-eared audience upon its release, the first few bars of the album indicate this is a special, timeless album that transcends the musical boundaries that many artists were seeking to break through at the time.

From the funk sounds of “Law Laffeina El Ard” (Single 1, out September 1 with Pre-Order announcement); the moody, mellow sounds of “Kabl Ma Nessallem We Nemshy” (Single 2, out September 23) or “We Mesheet;” to excursions into Latin sounds in the title track “Orkos,” and disco with “Ana Gaya” (Album Focus Track, out October 10) the album is an amalgamation of genres that stands out from the immense creativity present in Egypt at the time.

We connected Maha in late 2021 and she was clearly surprised to have someone call about music she recorded more than 40 years ago. She also seemed interested in the idea in bringing her music back to people’s attention. A few weeks later we were speaking with our friend Moataz, who runs the Disco Arabesquo project and showed him this great new album we found and to our surprise he knew the album, having found a copy of it a year or two before, in Cairo. It was then obvious to team up for a collaboration for this project. You can find Moataz’s story about Maha and her music, as well as extensive interviews with Maha herself, in the booklet accompanying the release.

As always, both vinyl and CD come with an extensive booklet featuring interviews with Maha as well as unseen photos.