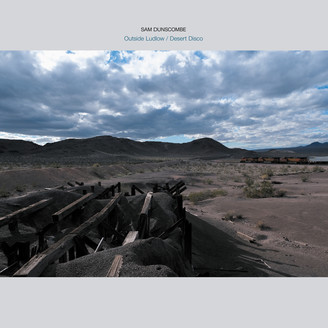 Play All LP
Outside Ludlow / Desert Disco is the first major solo release from Australian performer-composer Sam Dunscombe, now based in Berlin after residing for the past decade in San Diego and Tokyo. A virtuoso clarinettist who has performed in composed and improvised settings with artists such as Klaus Lang and Taku Sugimoto, their practice also embraces computer music, lo-fi electronics and field recordings, in addition to their long-term commitment to archiving, studying and performing the work of Romanian spectralist composer Horatiu Radulescu.

The two side-long pieces presented on this LP began from a chance encounter in a specific geographic location (documented in the photographs that grace the record’s sleeve). Exploring California’s Mojave desert with a friend, Dunscombe made the unlikely discovery of a tangle of quarter-inch tape snared on a cactus. The digitised version of this tape, variously edited and processed, as well as Dunscombe’s own transcription and embellished performance of some of its material on Hammond organ, makes up one of the main ingredients of the LP’s first side. The other is a field recording of the area outside the ghost town of Ludlow, where the tape was found, where haunted silence is punctuated by freight trains and clusters of explosions from gold mines and the local marine corps. Far from any kind of documentary approach, the resulting composition reaches back to the smeared atmospherics and overdriven tape crunch of Hands To, Small Cruel Party or Joe Colley, before the Hammond organ rises up to cast a spectral shimmer reminiscent of 1960s tape music classics like Arne Nordheim’s ‘Warszawa’.

On ‘Desert Disco’ (its title perhaps a clue to the content of the mysterious tape), Dunscombe zeroes in on a single fragment of the tape, accompanying it with analogue synthesis to craft an immersive work based on a single chord. Throughout the course of this work, the monolithic opening sonority gradually splits apart, revealing an infinity of rhythmically phasing lines that swarm like a cloud of insects and patter like falling rain, placing Dunscombe’s piece in a lineage of patient electronic exploration that includes landmarks like Costin Miereanu’s Derives and the contemporary work of Jim O’Rourke.