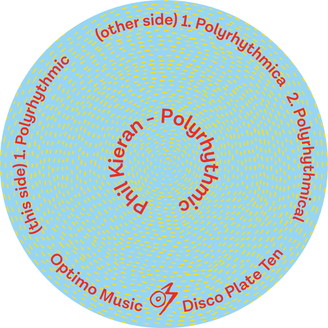 Play All 12"
After a year’s hiatus Optimo Music Disco Plates returns with the first of several planned releases.

First up is long time friend Phil Kieran with an EP made specifically with Optimo in mind. It has been tried and tested over recent months and more than ticks all our boxes. We feel confident it will tick yours too.

Phil says “The Ep was recorded in my house and made up of mostly live percussion performed live by Thomas Tettey Annang. Originally from Ghana, he moved to Belfast some years ago. It just so happens his wife is a close friend of my sisters and that was the first introduction. Thomas now runs "Releasing Rhythms” here in Belfast teaching drum classes.

We used a wide selection of traditional African drums that all have their own name, each one has a style and a sound. The rhythms used in this record would stem back to South American rhythms but using African drums. This was a sound and rhythm that influenced early post punk records in New York and still has an influence on dance music today.”