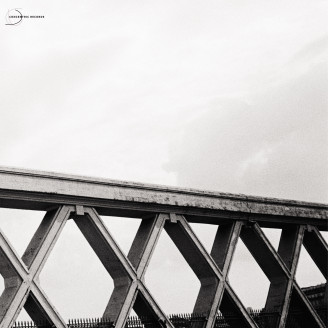 The album opens with calm, bright and assertive tonalities, evoking mental spaces prone to exploration and wondering. Molecular textures and real-world sounds bring us closer to an intimate and physical sphere, a voice. Ultimately everything dissolves into a synthetic domain of acid-like washes, in a cinematic sense of departure.

MAX LODERBAUER has been an active engineer, producer, and musician across four decades. He first came to notice in the late ‘80s as a member of Fischerman’s Friend. Known then as Daimler Max, Loderbauer’s associates included Stephan Fischer and Tom Thiel, as well as producer Thomas Fehlmann. Once the group went dormant, Loderbauer and Thiel established Sun Electric; one of the leading sources of entrancing downtempo and ambient techno through the ‘90s. During the 2000s and 2010s, Loderbauer collaborated in numerous settings, including NSI with Tobias Freund, Chica & the Folder with Paula Schopf, and Moritz von Oswald Trio with Vladislav Delay and Moritz von Oswald. Loderbauer was partly responsible for some of the most progressive and experimental electronic music released during these years. In 2011, he and contemporary Ricardo Villalobos assembled Re: ECM, a project that involved radical transformations of ECM label recordings by the likes of Bennie Maupin, Christian Wallumrød, John Abercrombie, and Arvo Pärt. More recently he consolidated the collaboration with Ricardo Villalobos via the Vilod project, and with Samuel Rohrer and Claudio Puntin as Ambiq - both described as ‘a fertile patch of inspiration, shaking up the principles of minimal techno with the loose, expressive qualities of jazz’. The album opening track - ‘Harmonic’ - feels like a glowing dream. Composed of stunning electronics in a polychromatic, blinding and shimmering light; harmonious interwoven melodies calmly wind down invoking a serene mental state and grounding peace.

WILLIAM SELMAN was the very first artist ever approached by Concentric Records prior to the label’s birth, back in 2018, following his defining release ‘Musica Enterrada’. A musician and multimedia artist currently based in Portland, Oregon, his work employs analogue and digital synthesis techniques, live percussion and instrumentation, and his own rich field recordings to create compositions and sound art focused on the ideas of place and environment. Selman's recent works have been released on Mysteries of the Deep and Hausu Mountain.

PETRE INSPIRESCU is an extremely versatile composer. As co-founder of the legendary RPR Soundsystem together with Rhadoo and Raresh, he mostly produced club-ready, heavily textured takes on tech-house and minimal techno. In 2015 he released his first album on Mule Musiq, considered a significant departure from his previous work, scoring piano, strings and woodwind instruments for the first time, resulting in a set that sat somewhere between ambient and neo-classical. Since then, he continued to explore further sonic territories, adding in vintage synthesizers and occasional nods to dub techno, resulting in melodious sequences of musical movements that relate to the work of classical composers, American minimalists and ambient legends. ‘The Garden’ is a dreamy, intimate and nature inspired composition, recorded in his home studio in Ibiza sometime in the Summer.

DJ and producer SUPPLY (youngest so far on the label) was born and raised in Gießen, within sight of the skyscrapers of Frankfurt am Main, and has been living in Berlin since 2017. Musically socialised through hip hop, he found his connection to electronic music produced in Chicago and Detroit in the 90s by moving to FFM in 2013. For almost 6 years he has hosted his own events in his hometown. His productions connect the dots between hip hop, retro futuristic movie soundtracks and techno, he recently released on YAY Recordings. ‘Inhale / Exhale’ was created during a time of stress and mental tension, partly self-inflicted, partly result of my surroundings, as it turned out in retrospect. The track tries to capture a moment of taking a deep breath by releasing that tension for a moment. I came up with the first sketch one night around 4am, the final arrangement found its way onto a C60 Chromoxid Cassette - inhale - exhale.’ - Supply

THE WAVES is a post-punk and synthwave-inspired project led by Maayan Nidam, that places her vocals at its front and centre. As a musician obsessed with sound and the technology behind its creation, her workflow places a strong focus on the studio environment. Triggering chain reactions between guitar pedals, drum machines, modular synths and acoustic instruments, generating sounds in unpredictable ways. Drum machines keep a steady groove as to give support to an array of guitars and synthesisers, all topped with The Waves own, mostly unmasked, lyrics and voice. ‘Hold On’ was written by Maayan during the 2020 pandemic as she dived deeply in studio work in Berlin. Her lyrics are featured as part of the art print insert, and have became a central statement to the LP and its narrative - the power to hold on and break through.

Jimmy Billingham's HOLOVR project has racked up various releases on some of the most forward-thinking electronic music labels over the past few years, including Firecracker Recordings, Likemind, Further Records, Opal Tapes and his own Indole Records. Though best known for melodic, drifting acid techno and electronica, he's equally at home crafting textured ambient soundscapes. HOLOVR's deeply emotional synth passages and pads will take you on a journey into the outer. 'Melancholy of Time came out of a period exploring ways of producing and recording outside of the grid-based structures that I was previously working with. I wanted to strip it back to what I often find to be the emotional core of a piece of electronic music - ebbing and flowing synth pads - but to push and pull it a bit to create a slight disjointedness, unpredictability and shop-worn texture, as if it's coming apart and fraying, yet retaining a sonic clarity. I recorded it live using looped and layered synth phrases, underpinned by a layer of hiss and pin-prick textures. I find reflections on time and its passing to be a recurrent feature of my work, both in a more straightforward way of harking back to music of a certain period or pieces of equipment but also in a more abstract sense of creating a feeling where time doesn't matter - a deep feeling of now; that escape that you find in music and other ecstatic experiences. Though of course we’re always in - and running out of - time, and hence the melancholy.’ - Jimmy Billingham

Hailing from the German underground scene, ASWA [aka Attila Fidan] has an intricate, hypnotic style of electro, techno and ambient. Coming from visual arts and not primarily a trained musician, Attila produces under various and multiple monikers: ‘I never really start out knowing which moniker the track will be made under’. Since 2017 he runs a boutique Berlin label named ‘Tape Archive’. ‘Dust Palace’ is a synthetic piece that resonates with a cinematic vastness, closing the LP in an uplifting tone that evokes new departures and new beginnings.