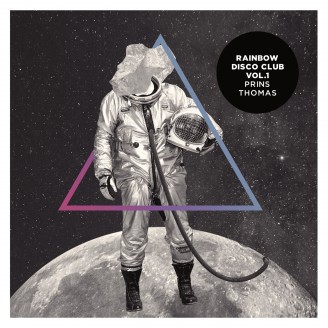 Play All CD
Free the funk and let the electrifying madness take control: Prins Thomas jumped on the mixing decks and prepared a sonic trip for Endless Flight records and the Japanese festival „Rainbow Disco Club“.

Already twice the man from the Norwegian woods has been a guest on the top-notch Tokyo based festival. In 2014 he did not only play alongside edgy colleagues like Moodymann, DJ Koze or Kuniyuki.

He also conceived with the festival organizers and Endless Flight man of action Toshiya Kawasaki the plan to do a mix cd that mirrors his current state of the art behind the wheels of steel. Those who are familiar with the work of the Scandinavian free spirited producer, label maker, and DJ will know that he does not like to repeat himself.

As a liberal artist he is always willing to enter new territories to reach a higher state of mind. Anciently his mixes for labels like Eskimo Recordings were characterized by a fusion of Krautrock influenced grooves, leftfield electronica, odd techno and house as well as epic psychedelic music that you do not hear that often from DJs who play regularly in all major clubs around the globe. Now the man behind labels like Full Pupp and Internasjonal has taken again a different path and prepared a mix with his favourite tracks out of the wide spectrum of dance and beyond music. Its dramaturgy is one that never stands still, that builds up a highly emotional story arc to highjack listeners into a demanding world of headstrong rhythms, chords and melodies.

It all sounds like Prins Thomas had a lot of fun while doing it. It is not a mix that distributes the feeling someone gave a lot of thoughts on it to make sure that he pleases its receivers. Instead the mix delivers the impression that Prins Thomas just freely played with his music collection to feel like a kid in the candy store.

Stylistically all is between genuine genre characteristics. There is house, there is techno, dub sneaks around the corner, as well as flawless electronic sounds, some jacking Hi-NRG exultation and breezes of dark waving acid-laden electro. All is far away from a streamlined repetitive journey that comforts your life.

It is more a mix to which you need to surrender in order to get absorbed. In terms of selection Prins Thomas presents some signals from outta space by producers like the Italian dreamy techno one-off-a-kind Donato Dozzy, Chile based sound scientist Atom TM or Berlin’s dusty techno kid Shed. He manages to combine playfully remixes and tracks by people like Detroit’s freaky jazz-head Theo Parrish, his musically libertine fellow countryman Bjørn Torske or Birmingham’s techno original Surgeon.

There is also a ray of post punk represented by a Crash Course In Science song that comes in a twisted Ricardo Villalobos remix. You hear a Sex Tags Ufo message delivered by the labels co-founder DJ Fett Burger and his mysterious buddy Speckgürtel. Furthermore Glasgow’s hottest new band export on the crossroad of jamming funk punk and free wheeling electronics Golden Teacher and the neo psychedelic duo Moon Duo, who seduce in a remix by UK based producer Tom Furse, are in charge for percussive emotions.

Finally the unpredictable mix sensation waves good-bye with an uplifting Gerd remix of the piano house gem “Do You Feel Me”, originally released in 1993 by NY’s Finest. At its very end the track cranks out as if Prins Thomas’s record players have been got cut off from the electric power. When the final moment arrives it feels like somebody kicks you out of a lost in music feeling that you wish to go on and on.