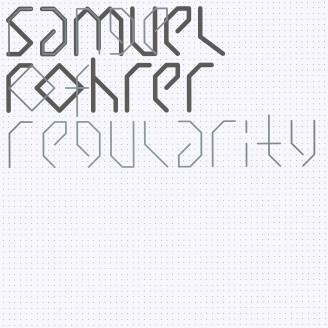 Play All CD
Samuel Rohrer, the multi-faceted, forward-thinking percussio- nist and producer behind the arjunamusic label, the AMBIQ trio and a wealth of other musical projects, has set out on his own with a new full-length solo album Range of Regularity as a double EP set with a deceptive title if ever there was one: the sonic experience of this record is, in fact, a highly irregular one (and a highly welcome one at that). Constructed almost entirely upon electronically-treated recordings of acoustic in- strumentation, with a bare minimum of synthesizer voicing, RoR vibrates with a compelling organicism - as if old-growth Black Forest trees had conspired together to make an album of ultra-modern improvisational music. Indeed, the record feels limned with contributions from some ‘other’ intelligence, despite being a clear extension of the fluid, percussion-driven musical technique that Rohrer has exhibited in previous years.

Opening with the track “Microcosmism,” the sound-forest feeling immediately takes effect, and the listener can either enjoying navigating a path through this verdant total environ- ment or just being lost in it. Sonic organisms fly in and out of your headspace here at different speeds and bring with them all kinds of different dispositions, though Rohrer’s reliable propulsive rhythms are always there to help direct traffic. “Le- nina” does not abandon this unique aesthetic, but reprises the story with a different vocabulary (in this case, deep synth-bass signals, piano runs and all sorts of hyper-real ventilations). “Nimbus,” not at all an ambient cloudscape like the title might suggest, temporarily dials back the feeling of modular assem- blage that powers the previous two pieces, and allows Rohrer’s drumkit to come to the fore, working away at a determined snare-driven beat that brings a variety of treated sound ephe- mera out their hiding places.

After the gentle - but never too precious - interlude of “Sun- clue,” “War On Consciousness” emerges as the album’s infec- tious tour de force. As the title implies, the feeling here is of using sound to fend off some sort of invasive energy, and the epic battle that ensues features a full concert’s worth of tim- bral variations and audio events. Incisive rhythmic patterns slice away like finely honed blades at an insistent mechanical chattering, while cautiously walking acoustic bass adds an ex- tra layer of defense. “Uncertain Grace” closes the set out with an extra layer of defense. “Uncertain Grace” closes the set out with a busy multi-layered arpeggiation punctuated with bass drum hits, from which a melodic narrative gradually emerges like a distinctly human face rising from a field of visual noise. As the drums again join in, the final exclamation point is added to a very personal artistic statement. Though fans of adven- turous music will find similarities to other progenitors of rhythmic intelligence (classic Can, for example), Range of Regu- larity stands perfectly well on its own.