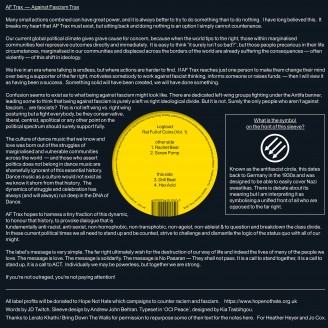 Play All 12"
AF Trax = Against Fascism Trax and is a new label project instituted by JD Twitch/Optimo Music. Its aim is to make a musical and cultural protest in opposition of rising far right politics and ideology in the world. Encouraging artists to make music intended to interrogate these toxic ideas, and with all label profits donated to Hope Not which campaigns to counter racism and fascism. Against Fascism Trax’s intent is to provoke conversation, inform and financially support the opposition to fascist thinking. Its simple idea is that we must do something more than just talking. The moral thing to do is to act.

AF Trax plan to release 10 Eps in 2019. The first release is a 4 track EP from Logtoad, channeling UK hardcore but in a 21st century way.

Logtoad is a performance artist, sound designer, DJ and veteran of Glasgow’s music community, active since 1992.

He has performed live music a handful of times under a variety of aliases. He currently lives 225m above sea level, less than 50km from Hunterston B nuclear power station.