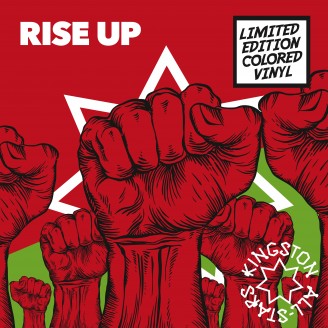 Rise Up Kingston All Stars

Play All LP Coloured, Limited Edition
The music contained in this album invokes the vibes and spirit that were so crucial to much of the music recorded during the 1960’s & 70’s in Jamaica. If you talk to the musicians and singers of this era, they will tell you that the driving force behind the songs they created was the sheer love of music. This is one of the reasons these recordings are so powerful and move listeners to this day. Music like this can only be made by those who were schooled in the studios and yards around Kingston and is not something that can be easily reproduced outside Jamaica. The Kingston All Stars represent some of the most legendary musicians to ever grace the little island & it is thanks to their passion and dedication that we have a lifetime of music to enjoy.

The members of KAS have been working & recording with each other in some of Jamaica’s most legendary studios for over 50 years. The vibes and music that are created when they get together is nothing short of magic. This is the 3rd KAS LP showcasing the talents of Jamaica’s top session musicians from the golden era of Jamaican music. These are the artists who laid the foundation for Rocksteady, Reggae, Roots and beyond in countless recording sessions around Jamaica & without them the music we love would not exist.

Singer Allen Jahsana who is known for his work with Mikey Chung in the early 70’s brings two amazing songs to the project. The first “Jungle Justice” is a commentary on the lack of justice in the tough streets of Kingston, one which Alan knows firsthand as a longtime Kingstonian. The second vocal “Rising from the Ghetto” is a call to the youth to rise up out of sufferation with some seriously heavy basslines courtesy Jackie Jackson.

New to the KAS family Carol Brown’s “Only Jah Knows” on a sweet dubbed out Rocksteady riddim shines that much brighter with the help of her daughter, Krystal Mittoo. Carl was married to Jackie Mittoo before his untimely passing.

Greenwich Farm rasta and legendary roots vocalist Prince Alla adds a real classic vibe to a new he wrote titled “My Vision". The deep and powerful style Alla is known for was voiced on a riddim built by keyboard legend Ansel "Stagalag" Collins.