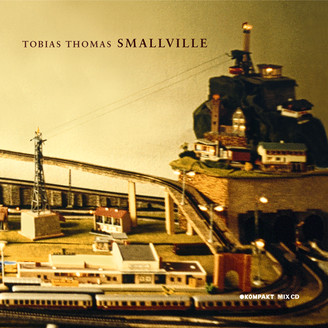 In 1999, Tobias Thomas released his first mix CD "Für Dich" (Engl. "For You") on Kompakt. The basic idea behind it was to represent the dramaturgy and chronology of a club night – the "Total Confusion"-night at Studio 672/Cologne in particular. More subtly, it focussed on two central themes: love and communication. "Für Dich" emanated from the idea that a DJ-mix always has to tell a certain story. Therefore, like a text or speech, it implies an addressee, a "you" to be communicated with, directly or indirectly, subtly or explicitly. And "love" emerges as soon as this story can be read as a kind of gift, as address and finally as a dedication: This is "Für Dich" ("For You"). Like "Für Dich", Tobias Thomas' new mix CD "Smallville", recorded at the (empty) Studio 672 by means of two analog record players, tries to transfer the dramaturgy of a "Total Confusion"-night on to a tight mix of 70 minutes. A delicate , romantic start, gradually progressing to a short climax and then, a hynm of a final. As regards "content" "Smallville" is about social space, origin, difference, and reflections. The "small ville" is metaphor for a tight social space with its very own – frightening as well as magic – rules. "Smallville"also specifies a place of origin as well as the current, social and geographic environment, i.e. the context out of which the mix/author speaks to us. "Smallville" is pleading for the productive and passionate reflection on the social environment, actually your own "small world". It tries to promote an attitude that not necessarily believes in escapism, in the "migration" into "metropolis", this utopian place promising a fulfilled life and unlimited possibilities but which, in the end, is enclosed by the same boundaries.

The title "Smallville", taken from an American TV series, ibidem names the fictional origin of a young hero called "Superman". The title refers to a state of "being different from others", to the peculiar processes implying the "coming of age": the loneliness and longing produced by a "Smallville", the freakiness and otherness developed by each individual and the abstract engery which has to be cultivated.

"Smallville" is a fusion of different people and music styles from all over the world (Hamburg, Berlin, L.A. Goeteborg, Paris, New York, Cologne, Stockholm, Tokyo, Bergen). The result is a joint music story of the social: on the tight space of a profane mix CD, the otherness of each individual remains untouched, but at the same time simply disappears by communicating with each other. A special feature of "Smallville" is the bootleg-like overlapping of Kaito's beatless version of "Release your Body" with the accapella of "Ghost Train" by Erlend Oye and Morgan Geist. Unfortunately, due to licensing problems, it was not possible to use the original text which plays a vital part in the story, So Tobias Thomas simply asked his best friend Superpitcher to sing it at a proper recording studio and in hindsight, thanks to digital media and the magic done by Olaf Dettinger, the text could be integrated into the mix.