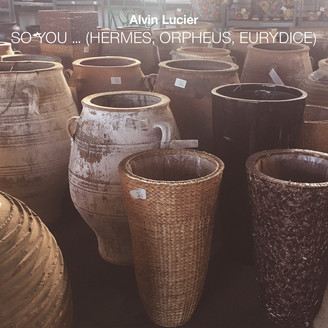 Play All CD
So You ... (Hermes, Orpheus, Eurydice) is a major new work by legendary experimental composer Alvin Lucier. It is an hour long epic that tracks the familiar Orpheus myth from a less familiar perspective: that of Eurydice as imagined by poet H.D.; a Eurydice who rails at Orpheus for his hubris in attempting to rescue her. Two key, and formerly distinct, aspects of Lucier's practice come together in this piece: the exploration of interference patterns in closely tuned intervals, and the exploration of resonant chambers. From speakers mounted inside amphorae a constantly turning braid of beating sine waves trace the descent into the depths of hell, and then the doomed attempt to climb back into life. Singer Jessika Kenney and long-time Lucier collaborators Anthony Burr and Charles Curtis embody the three title characters in deeply focused performances that assert themselves against the process of the sweep, or become enfolded in it. The electronics were mixed in real time by programmer and equipment designer Tom Erbe.

This record has all of the mind-bending acoustic effects you'd expect from a Lucier piece, but also features a strong sense of narrative drama and flashes of raw emotion that are unexpected and deeply affecting. Presented in a deluxe digipak with a booklet featuring the original poem and extensive liner notes by Alvin Lucier, Anthony Burr and Cathy Gere. Design by Lasse Marhaug. Mastered by Doug Henderson at micro-moose, Berlin