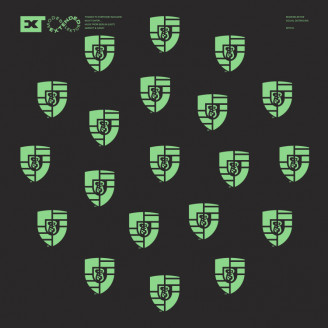 Play All 12"
The second EP being released in the wake of the recent Extended mixtape, Social Distancing showcases Modeselektor’s talent for bridging the gap between hip-hop and the rave. The title track reunites the Berlin duo with Flohio, who first appeared on their 2018 single Wealth. Social Distancing is the end result, and while the swaggering cut could easily carry an EP on its own, Modeselektor have decided to up the ante by inviting a talented crew of friends and colleagues to put their own spin on the track.

Like all good hip-hop EPs, Social Distancing comes with an acapella version of the title track, but here, Flohio’s rhymes have been maniacally stretched, smashed and warped by veteran producer Richard Devine. Rounding out the record is Social Engineering, a sleazy, static-laced techno reimagining of Social Distancing. It’s a lot of fun, which makes sense, because even after all these years in the music game, having a good time is still Modeselektor’s primary m.o.