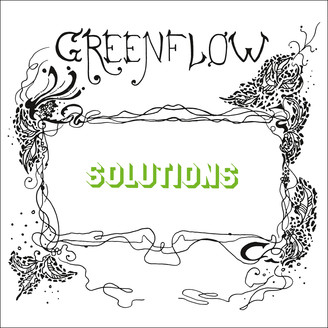 Play All LP+DL
Originally released in 1977, American soul-funk-R&B group Greenflow’s Solutions is one of those rare marvels – a privately pressed soul-funk record that lives up to its mystique, an album whose magic is matched by its seemingly unknown provenance – where did this gem appear from, and how did it magic itself into being?

There isn’t too much to know about Solutions. Greenflow was the Californian vision of Art Greene, a trombone player and singer who formed the group sometime in the mid 1970s with his sister, vocalist Eleanora. They dutifully played the circuit, blasting out R&B numbers and originals in clubs. The group also took part in United Services Organizations (USO) tours to perform for US military deployed over the world – one tour, in 1976, took them to Japan. One of the members of Greenflow for that tour was bass player Rick Bozzo, who also worked with Meatloaf in his early years, when the latter was the young Marvin Lee Aday, in the group Popcorn Blizzard.

Bozzo doesn’t appear on Solutions, which was recorded after Greenflow’s Japanese tour, but for the album session the line-up does feature Allan Talbert on sax and Joe Banks on trumpet, both of whom, it appears, had connections with jazz organ player, Wattstax musical director and Inner City and Parlour Records owner, George Semper; Talbert, it seems, was also in one of Arthur Lee’s early bands, before the Lee formed legendary psych-pop gang Love. So, there are some heavyweight players here – but the real test is what’s hiding deep in the grooves.

Solutions is a mercurial album, one of rare charm and spirit. Some might already know one of the album’s key cuts, the deep, sensual “I Gotcha”, with its winding ‘doo doo doo’ melodies, from its inclusion on Numero Group’s WTNG 89.9FM: Solid Bronze compilation; lush and lithe, it’s a dream spirit of a song. “No Other Life Without You” is a sweet swoon, a slow burning boy-girl duet; “Sugar Daddy” is a funked-up streetwise prowl; “Every Single Time I Dream” is a lover’s vision, with a sly, snakecharming flute writhing through the verses before the song opens out with gentle droplets of tinkling Rhodes.

Solutions fades out with the lush AOR soul of “I Wanna Hold You”, a righteous drift of longing and languor. Long out of print, selling for upwards of 300€ on the rare occasions that an original copy actually surfaces, and only previously reissued on CD in Japan, as part of Yusuke Ogawa’s legendary Deep Jazz Reality series, Imara’s public service of 2021 is making Solutions available again for the discerning buyer, burnished to a gorgeous shine thanks to Jörg Burger’s incomparable mastering.