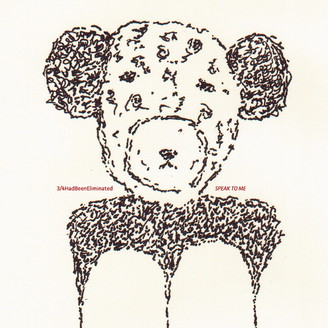 Speak To Me 3/4 Had Been Eliminated

Play All LP
Black Truffle is pleased to present Speak To Me, the sixth full-length release from 3/4HadBeenEliminated, the Italian trio of Stefano Pilia, Claudio Rocchetti and Valerio Tricoli. Based on source material recorded in Bologna and Berlin over the course of several years, the album is made up of two side-long pieces meticulously constructed in post-production by Tricoli in his singularly dense and unpredictable style. Although their live performances have always been entirely improvised, in their recorded work the group focuses on using improvised recordings as source material for compositions built up through layering, editing and analogue manipulation, extending the practices of Teo Macero, Faust and This Heat. Melancholic instrumental ruminations sit alongside cracked electronics, concrete sounds and Tricoli’s whispered vocals, drawn together into dense assemblages animated by gradual transformations and sudden jump cuts.

Beginning from the abstractions of their self-titled debut release in 2004, the group embarked on a trajectory that saw them move toward near-song structures, Tricoli’s voice becoming a dominant element amid an increasingly dense and layered production style. On Speak To Me, however, the listener feels confronted by the ghost of music, sonic memories echoing across a psychedelic expanse. Evacuated of any clear structure, the music becomes a reverb-saturated morass, from which crystalline details momentarily emerge: shimmering echoed guitar, bowed double bass, tactile hand percussion, skittering electronics. Suffused with a darkly pensive atmosphere, Speak To Me is an elegant summation of the distinctive blend of electroacoustic techniques, instrumental improvisation and contemporary psychedelia pioneered by 3/4HadBeenEliminated over the last decade.