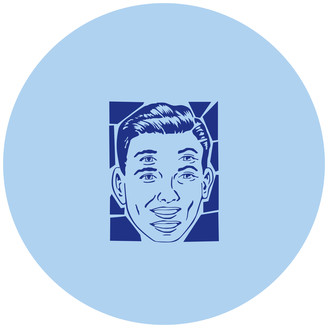 Play All LP
Edit Service is proud to present its 6th release, this time featuring Youkounkoun, a duo comprising of Jeff Lasson of Get A Room and Gaëtan Rossi.

After releasing on Multi Culti edits and Edits du Plaisir, the duo delivers a mini-LP with a diverse range of tempos and moods, from dancefloor-friendly cuts to weirder tracks with Gallic oddities, Dutch new wave, Spanish minimal wave and experimental Iranian music used as the source material. The unsettling post-punk, industrial and mutant kraut energy in those tracks could not be further removed from lazy run-of-the-mill disco edits. In true digger spirit, Youkounkoun picks tracks never edited before and painstakingly re-arranges them by adding a lot of additional production to completely transform these tracks for the dancefloor. The digital files for this LP will be officially released 6 months after the vinyl record is out.

A1 Qu’est-ce que je fais ici The LP opens with this plodding downtempo edit, where a cold but funky groove provides the backdrop for French lyrics about modern alienation, with a chilling result, like standing under pasty neon lights for too long.

A2 Novotel cocktail Slightly faster but still resolutely downtempo, this track features a dance-inducing rhythmic section with spot-on sequencing, understated but unsettling melodic elements and last but not least a range of vocal elements that give the tune an embodied but wholly dehumanized feel.

A3 Musique du texte More than just an edit, in this track the duo blends the French and Japanese spoken words and oriental-leaning melodies from a largely beatless track with a totally new and different rhythmic section featuring a funky post-punk bass guitar and a four to the floor groove. The result is dizzying and irresistible.

B1 Mouvement perpetuel On this particularly mutant cut, bass guitar licks, tight drum programming and dreamy 70’s synths are used with dramatic effect by the duo to highlight the weirdness of French spoken word about perpetual movement: nothing is lost and everything is transformed.

B2 Metallic waves With a much more synthetic feel than the rest of the record’s hybrid offerings, this tune immediately stands out with its heavy and compelling groove, where eerie voices and a flurry of uncanny sounds create a strange and disorienting effect to which the most appropriate response seems to start dancing.

B3 Je veux pas danser In this dissonant and neurotic track, it is highly likely that a relentless synth bassline, an uptempo groove, morbid sound effects will set bodies in motion, even when unsettling Flemmish vocals about not wanting to dance try to convince listeners otherwise.

B4 In my castle In this hallucinated edit where sounds reminiscent of oldschool Chicago house and dub music are used for completely different purposes. Dance-inducing and hypnotic, it plays on the repetition of melodic and rhythmic elements. Delightfully off-kilter, it closes the LP in style.