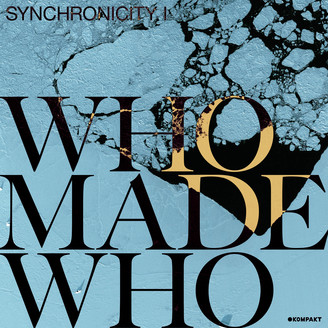 Play All Digital Single
“We have always been very fortunate to meet and know many talented producers. In recent years, we have been exploring those relationships with different remixes and collaborations, and every time something exciting came out. That’s why we started our Synchronicity project. To challenge ourselves making inspiring, fun and beautiful music. ‘Synchronicity’ means "the simultaneous occurrence of events which appear significantly related but have no discernible causal connection. This very well describes how our path led to the place we are now – somewhere between the club and indie scenes.” – WhoMadeWho

Though we both have yet to strike a note together since the release of their 2012 full length “Brighter” (KOM 254), WhoMadeWho have been remarkably productive. With two full lengths, a DJ mix for Watergate’s series and releasing two of 2019’s most played out club tracks together with Rampa (Innervisions) and Artbat (Watergate Records), the trio have found themselves diving more and more into the world of electronic music, tapping into their goldmine of connections within the scene to spearhead an array of collaborations.

The result is Synchronicity – a series of 3 EP’s to be released throughout 2020 on KOMPAKT.

Synchronicity 1 gets introduced by none other than one of today’s most respected producers – Studio Barnhus’ own Axel Boman. With “Anywhere In The World”, they create an eccentric house number that conjures ghosts of Talking Heads past mingling in a smokey club that would make Adrian Sherwood proud. Echonomist is no stranger to the dancefloor with releases on Innverisions, Blue Shadow and TAU to name a few. Together they came up with with two of the four tracks. The first is “Interloper” and will appease any early WhoMadeWho fan’s appetite. The boys croon to an Italo bred disco rhythm of the catchiest kind. Adana Twins managed to get some studio time in with the boys before lockdown and with “Immersion” they make us yearn for the festival stages of yesterday’s past. It’s no surprise as they continue to dominate the Beatport charts which all started with their smash hit remix of “Roar” by our own Patrice Bäumel! Echonomist returns with the EP closer “Cecile”. They fall into a deeper affair carried graciously by WhoMadeWho’s signature baseline and the shimmer of guitars and sunset soaked synths.