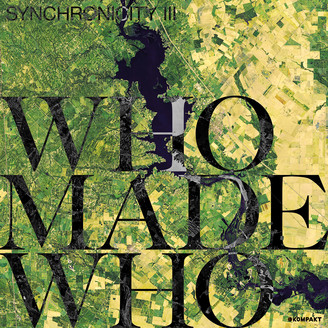 Though we both have yet to strike a note together since the release of their 2012 full length “Brighter” (KOM 254), WhoMadeWho have been remarkably productive. With two full lengths, a DJ mix for Watergate’s series and releasing two of 2019’s most played out club tracks together with Rampa (Innervisions) and Artbat (Watergate Records), the trio have found themselves diving more and more into the world of electronic music, tapping into their goldmine of connections within the scene to spearhead an array of collaborations.

The result is Synchronicity – a full length album to be released on November 13th.

The final chapter of our EP series is “Synchronicity III” – Kompakt’s fearless leader Michael Mayer joins forces with the trio to produce an outlandishly catchy house excursion. A throbbingly sexy groove twists around a nonsensically fun robo-disco vocal. Terr makes serious waves these days – from her exceptional releases on Phantasy, Correspondant, Permanent Vacation to released and operating own imprint Clash Lion they come up with “Falling Out” – an exclusive to this EP. This is the ultimate duet – her vocals harmonise with the band under flow with the perfect rhythm and beat of disco-fied refinement. Next up is Rebolledo – Mexico’s ambassador of dance floor devotion and one half of the legendary Pachanga Boys. A dear friend to the house of Kompakt. “Chaser” fuels those travellers of the night – a soundtrack for another dimension. Last but not least, fans will rejoice as Adana Twins return with a second collaboration together with the band. The clang of the cowbell is clear as a twisted guitar twangs to an ominous 4/4 rhythm.