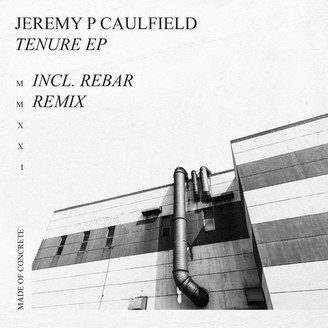 Play All Digital Single
'Made Of Concrete has been predominantly remained a reliable and consistent outlet for chilly, powerful Techno as well as a wide variety of material falling slightly left-of-centre.

With previous releases coming from the likes of Markus Suckut, Roberto Clementi, Oliver Deutschmann and Kyle Geiger - the output has remained highly functional since the label's inauguration in 2015.

In for their next release is Dumb Unit boss and Techno stalwart Jeremy P Caulfield who offers up his first full EP for the label after his remix for Elias earlier this year.

Caulfield is a veteran producer and selector who has successfully joined the dots between House and Techno across an illustrious career - no residing in Berlin, he specialises in the deep, refined floor-fillers that reflect the music the city is famous for.

His “Tenure” EP kicks off with “Soffit” which melds twisted, cinematic tones and sharpened hats with a persistent, pulsing groove. Reverb and delay are deftly controlled to provide a capacious sense of space while a thundering kick keeps things pinned to the floor.

“Tenure” then follows up with a stripped, hypnotic banger. Head-bending electronics and bleeps rotate over a potent groove which is guaranteed to send dance-floors into rapture. Rebar's “Smoke Trail Remix” then dims the lights a tad as it progresses subtlety and steadily bringing an EP of heady, sophisticated tracks to a close'.