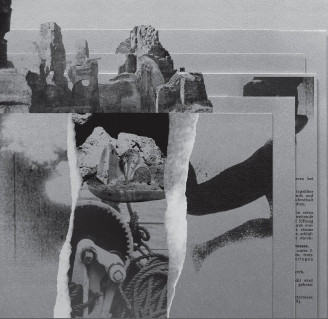 Play All 2xLP+DL
This double album is a new collaboration between long-time Umor Rex artists Andreas Gerth (one half of Driftmachine) and Carl Oesterhelt (11 Pieces for Synthesizer). Both developed their shared musical cosmos during their time with the now defunct Tied +Tickled Trio. Oesterhelt is also known for his solo compositions for orchestras and for collaborations with Johannes Enders and Hans-Joachim Irmler of Faust.

As futurism seems inherent to electronic music, the backward-looking view is alien to its nature – consequently, a dialectical struggle between these principles is rarely expressed with the means of electronics. Especially today, its essence as a medium of progress stands in opposition to a sceptical position. By reconnecting us with history, The Aporias of Futurism seeks to define a critical location, that stands in opposition to the postmodern concept of interpretation, deconstruction and reformulation and the belief in progress that goes with it.

The working method for the album Andreas and Carl followed was the usual musique-concrète-technique – cut/assemble/edit/process pre-recorded sounds – but instead of deconstructing the concrete noises into an abstract sound entity, they followed a different path: the organic interweaving of orchestral structures with the electronically processed noise layers into a composition in the sense of classical modernism at the beginning of the 20th century.

Carl started with sketches recorded via a broken CD player, processed through a ring modulator, which sounded like old electronic music from the 1950s. To interact with these fragments Andreas recorded and processed a plethora of everyday noises, atmospheres, tonal fragments from the modular, industrial and shortwave radio noise, percussion in the form of door slamming, falling metal sheets, ball tracks, and so on. So, while they still played within the futuristic discipline, the reference to the past is actually unmistakable. One can hear it in the tonality of the contrasting orchestral passages, in the sound character of the processed samples and the sonic electronic layers. But it is precisely here, where a narrative tension develops. Theses and antitheses, extreme (unresolved) opposites, contrasts… essentially inner contradictions, or expressed in another word aporias… … but there is another factor at play here, something that plays a subordinate, almost ostracized role in the post-modern context: beauty (albeit the beauty of ruins) – beauty, the only refuge of the pessimist.

In the course of the process, a wide range of motifs and ideas emerged from the fog of memory. Free associations of concepts, books and authors from a wide period of time, such as Milton's Paradise Lost, William Blake, Robert Graves, ancient Rome, as well as Borges and Juan Rulfo. This flood of images is also incorporated on the album cover as a "free interpretation" of cultural objects and their relations in time.

The overarching motif of a sceptical rejection of the idea of Futurism is illustrated by a quote from Emile M. Cioran, the writer who most closely embodies the common spirit of the work presented here.

"But here comes the strangest thing: the Futurist idolizes becoming only until he has enforced that order for which he fought; then the ideal conclusion of time becomes apparent to him, the ‘always’ of utopia, which concludes and crowns the historical process. The conception of the Golden Age of Paradise par excellence, thus grips believers and unbelievers alike. But between the original paradise of the religions and the eschatological of the utopia there is the whole distance that separates a nostalgia from a hope, a repentance from a delusion, an achieved from an unrealized completion."

All music composed by Andreas Gerth and Carl Oesterhelt between Berlin and Munich, Germany in 2021. Produced and mixed by Andreas Gerth in Berlin. Mastered by John Tejada in Sherman Oaks, USA. Artwork by Daniel Castrejón in Mexico City.