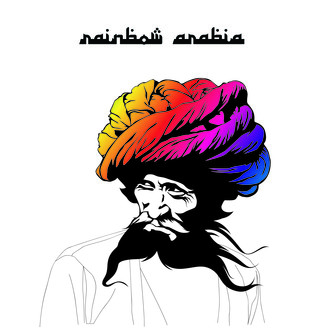 Play All Digital Album
Rainbow Arabia’s The Basta EP was originally released on Manimal Records in 2008.

Rainbow Arabia, consists of married couple, Danny & Tiffany Preston. The Basta is experimental dance music with a heavy dose of Middle Eastern influence. While the overall vibe stays in place, their means of execution requires many parts. The synth and drum machine workouts are certainly house-meets- tribal, but the menacing beats realized in "Let Them Dance" and "Hear No See No" aren't what lend those particular cuts their bones. What really sticks out are the serpentine guitar lines that slither their way through the EP, sometimes taking on the shape of post-punk spikes, garage crunch, and Edge-like delay effects. That sort of guitar eclecticism is mirrored in turn by Tiffany Preston, whose yips, yaps, and prairie crows work well in the Rainbow Arabia's efforts to transport as much as immerse.