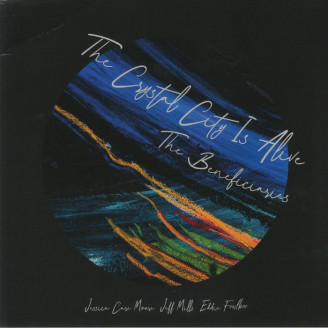 The Crystal City Is Alive The Beneficiaries

Play All 2xLP
In 2018, the idea was introduced by Jeff Mills to address the lack of artistic collaborations within and from the city of Detroit/USA. The city had always been an engine of new innovative ideas related to music, art, dance, poetry and all other arts. It was thought of as a way to demonstrate the commonality people possess from various art forms and that by mixing ideas visions and perspectives together are might produce unexpected and often provocative results.

The project started when Mills reached out to one of Detroit Techno's founder and legendary DJ/Producer Eddie Fowlkes. Though the two are known and connected to Detroit Techno and knew each other for decades, they never worked together so the first few meetings and conversations were marked with finding all the common links that have built both of their careers. During this time, Mills wanted to find a third person for the project, one that was from Detroit, but not a musician. His idea and theory was that by engaging two other creative thinkers would most likely produce something unique as emotions would become linked together to find that common, but higher level. While browsing the web, Mills discovered a post that featured the Detroit-born poet Jessica Care Moore. Struck by her words and the energy she mastered to say them, Mills knew immediately that she would be the perfect artist to approach for this creative venture. As with most artists that grew up in Detroit, they immediately opened up the links in their past, present and future outlook. He presented the case and explained to her how he thought it might work. She liked the idea and agree to join.

THE CRYSTAL CITY IS ALIVE. (A phrase extracted from Moore's words), puts the Detroit, America and the World on notice. The alarm has sounded and it is now time to mobilize all creative units to the frontline.