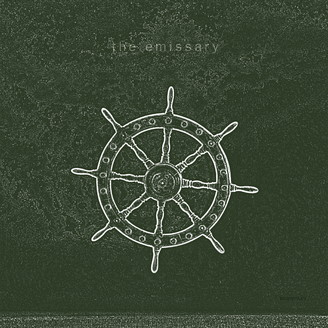 Play All CD
As one third of the founding trio of revered Cologne imprint Magazine, JENS-UWE BEYER has become an obvious choice for any adept of open-minded electronic music, both through releases such as the one-track-one-hour manifesto "Red Book" (Magazine 008), several contributions to our Pop Ambient compilation series or inspired remixes for Barnt, Dream Weapons and others. Besides this being the same mastermind as the one behind the ongoing Popnoname brand, you wouldn't expect upcoming THE EMISSARY to actually be a debut - but it is, for it's the very first time that we're treated to a full-length offering under the artist's real name.

To those who happen to know him personally, JENS-UWE BEYER is already a pretty multi-faceted guy, so it doesn't come as a surprise to them when his new album THE EMISSARY is, too. And what a well-rounded album this turns out to be, delving deep into a highly personal and unique sound cosmos made almost entirely of atmospheric pulses and beautifully textured drones. Layers and layers of minute details float in a cloud of sound, surging and fading in the most organic manner, giving the listener the impression of this actually being a pop album hiding in plain sight. Well... we didn't call it pop ambient for no reason, right?

But the connection goes a little bit deeper than just some GAS-infused sample droning with a hint of rhythmic structure - called a "very intimate" album by its creator, this collage of personal sonic impressions doesn't just check the boxes of what normally could be labeled pop ambient. It's a bit like a silent riot, calm on the outside, but seething on the inside, a run against the grain while embracing all the template has to offer. It's "more a question than an answer", says the producer, "and about the freedom to hear your own music in between the recorded sounds". His intention is to "open up spaces" - highly idiosyncratic spaces, pathways into the metaphysical, with "every listener being his own emissary" on this uncharted territory. Time for an adventure!