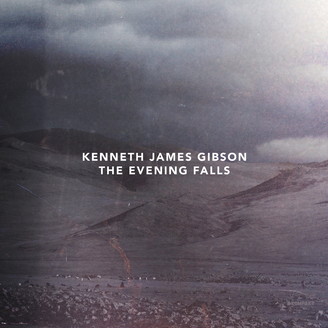 Play All CD
- The fourth instalment in our POP AMBIENT album series after stellar full-lengths from Leandro Fresco, Thore Pfeiffer and Jens-Uwe Beyer

- LP edition pressed on 180gr audiophile vinyl, including a download code for the entire album

KENNETH JAMES GIBSON, one of the most multifaceted artists in electronic music today, enlists for the fourth instalment in our POP AMBIENT artist album series - he's the mastermind behind the Adjunct Audio label and projects as diverse as [a]pendics.shuffle, Eight Frozen Modules, Reverse Commuter, neo-americana duo Bell Gardens (with Stars Of The Lid's Brian McBride) or noise pop band Furry Things. On THE EVENING FALLS, he deviates from his other, more beat-infused work and explores vast aural landscapes with an intricately woven tapestry of swelling string drones, shimmering pedal steel and minimalist piano motives.

The first strictly ambient solo offering from this incredibly versatile composer and musician reveals a delicate sense for rich, ruminant textures and fine-grained synth buzz dispensing organic highs on tracks like opening movement TO SEE YOU DRIFT, the Polaroid-colored LONG GONE CANADIAN SUMMER, the meditative A CONVERSATION BETWEEN FRIENDS or terraforming blues LATERAL DECOMPOSITION. The iridescent quality of these recordings almost appears to be born out of an auditory illusion - with the arrangements seemingly evolving in time lapse and slow motion at the same time.

The natural, wholesome flow of the album certainly finds itself influenced by Gibson's recent move to a 6000 ft. mountain community called Idyllwild. While two of the tracks on THE EVENING FALLS were started in LA about two years ago, for them and others to get fully realized, he needed to transition away from inner city roaming: "my wife and I heard the calling of the mountains for a while - getting deeper into meditation and nature and a slower way of life. There've been beatless tracks on many of my albums, but this is the first full-scale ambient album I've done... I simply needed to find the right focus." The result is a masterful new addition to our growing series of Pop Ambient full-lengths, presenting the fully-formed vision of a veteran producer who never lost his taste for sonic adventure.