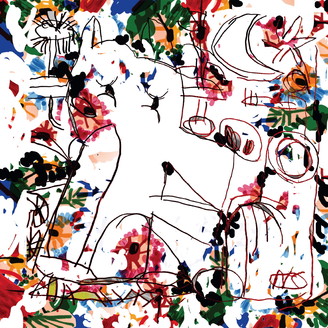 Play All LP+DL
Musically and emotionally, Superpitcher’s third full-length studio album, The Golden Ravedays is a one sound autobiography that exhibits the skill, feeling and style that the artist has honed over a period of twenty years, musically, and forty-plus-years, emotionally. And full-length it is: The Golden Ravedays is an epic album of 24 tracks that was released in January 2017 and is stretching over 12 respective chapter albums during a one-year period. The fourth chapter of The Golden Ravedays saga will be released on Hippie Dance in April 2017. Number 4 of the series introduces two further tracks of the sound adventure that Superpitcher is taking us on this year. Side A features Blood and Berry. It is a captivating track that reminds one of the very first years when Superpitcher made music under the alias Sir Positive. The beat is broken and the going is slow and rolling and the listening is a warm bath. There are flutes there that one never wants to stop and they almost don’t. However essentially sweet this track is, like a berry on the tongue, it might lead to some blood on the dance floor!

Listening to Side B of this Golden Ravedays edition is entering a ghost town, alone, under a full moon. Howl is a confluence of melodies and rhythms from Africa to Arabia where the snakes are being charmed out of their baskets and it is downright creepy. A spooky voice is saying something but we don’t know what exactly and it is bothersome because deep down we know that tonight when we are alone in the dark, we should be ready with the answer – or else. All we can do is wonder: Did Superpitcher sell his soul to the vampires for the vocals he let lose in this track? He answers by howling at the full moon behind thorn trees, in the shadows. Entertaining, thoughtful and brave! We salute the wolves and their master. Hooo-oooowl!