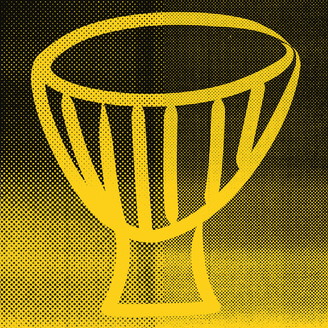 Play All LP+DL
Musically and emotionally, Superpitcher’s third full-length studio album, The Golden Ravedays is a one sound autobiography that exhibits the skill, feeling and style that the artist has honed over a period of twenty years, musically, and forty-plus-years, emotionally. And full-length it is: The Golden Ravedays is an epic album of 24 tracks that was released in January 2017 and is stretching over 12 respective chapter albums during a one-year period.

The fifth piece of The Golden Ravedays puzzle will be released on Hippie Dance in May 2017. Number 5 of the series introduces two further tracks of the sound adventure that Superpitcher is taking us on this year.

The djembe drum on the cover and the two titles of the tracks hint that this edition could potentially include stuff that was inspired by the rhythms and melodies of Africa - a sound legacy that is of great importance to Superpitcher. Side A features Bluesin. Rumor has it that Superpitcher visited South Africa and adventurously traveled into the deep bush-bush where he met new friends with captivating voices who speak in enchanting tongues. Initially, Bluesin is bursting with aching, longing and the oldest story of sorrow but there is also comic relief and pride in this story; typical of the emotional signature of the sound of Africa and the Blues that it gave birth to later on. Side B features Burkina. It all starts rather innocently with Burkina. One gets carried away by the funky, ethnic drumming thinking yummy yes, this is going to be a virtual trip to the Brazilian amazon, or maybe a corner of the Congo, Cameroon perhaps, and one is not even side-tracked by the arrival of birdsong and something that hypnotizes, like beautiful sirens because it is all too groovy for any dictionary, and then, oh boy, then their Mother Superior arrives and all hell breaks loose. Frogs, kudu horns, rattlesnakes, things that hiss and croak and the haunting voice of Her. As if that is not enough to make you believe you have been propelled to a new continent, wait until the ending of Burkina! It will transport you to another universe altogether!