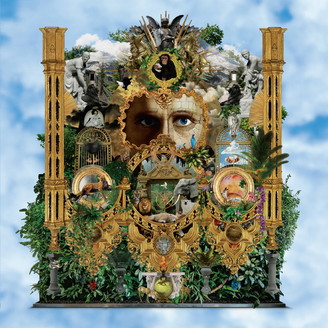 Play All LP+DL
Musically and emotionally, Superpitcher’s third full-length studio album, The Golden Ravedays is a one sound autobiography that exhibits the skill, feeling and style that the artist has honed over a period of twenty years, musically, and forty-plus-years, emotionally. And full-length it is: The Golden Ravedays is an epic album of 24 tracks that was released in January 2017 and is stretching over 12 respective chapter albums during a one-year period.

The sixth piece of The Golden Ravedays puzzle will be released on Hippie Dance in June 2017. Number 6 of the series introduces two further tracks of the sound adventure that Superpitcher is taking us on this year.

Side A features Protest Song. If music is a way of transporting us to other places, Protest Song takes us to a desolate, scary and loveless environment, a burnt-down, burnt-out place where the flesh of its former inhabitants is smouldering, void of goodwill and kindness in a cloud of toxic and greedy smoke. It’s all Kafka and Orwell and Suffering - the most twisted and eerie track so far in The Golden Ravedays saga. What is undeniably clear is an acute sense of regret and loss - a warning that it could have been avoided, had we only listened to our hearts and protested.

In the same vein on Side B we hear powerful Resistance. Produced after the Paris attacks of 2015 Superpitcher outdid himself with this strong message of Resistance. Where Protest Song paints a picture of under-worldly doom, Resistance’s techno beat and insistent refrain sweeps us to the surface of the muck of hatred and intolerance we’ve politically been dumped in. A voice that seems like a trapped animal is calling out to us. What is it trying to say? Is it crying out for help? Is that animal all of us? Resistance represents hope and encouragement and could be the perfect marching track to any demonstration against negative forces. Much needed in this age of bigotry where it seems like time has leaped backwards to a darker side of history. As for the dancefloor – Resistance is irresistible!