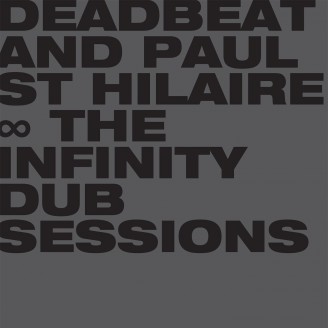 Play All 2xLP
Deadbeat. Tikiman. Infinity. Dub. A quadrangle of such obvious statement and perfect musical inference may very well never have been uttered for those of the wholly weeded out persuasion. Indeed, when the great book of Dub music is written the names Scott Monteith and Paul St Hilaire will undoubtedly figure highly in its chapters devoted to recent years. Monteith, the last great prodigal son of the doctrine handed down from the Blue Mount of Lord Scratch and King Tubby, St Hilaire the undisputed voice of a generation, those fanatical warrior monks, followers of the most Holy House of Ernestus and Von Oswald incarnate.

Having developed a fast friendship from their very first meeting in Montreal at the premier Micro Mutek event a decade ago, Deadbeat and Tikiman's occasional collaborative performances have since blown the minds of audiences from Berlin to Tokyo and many points in between. No great surprise then that their first album length venture is a Tour de Force of Dub music of the highest order.

Nearly a year in the making, the genetic code of Deadbeat's Infinity Dubs series gets shot through with a Dreader than Dread Kingstonian logic, hi hats dropping back from the three to the one, Tikiman at his most militant, poetic, fierce, and flowing. These are the recordings of two lions uncaged, and none who bare witness shall escape their fiery judgement.

If music is truly eternal, here be two voices which shall echo in infinity with all the weight, reverence, and dire power unleashed with every tectonic bass hit, and every whimsical turn of phrase. And if these eight burnt offerings are any indication of what happens when these two sit down for a session of smoke and reasoning, here's hoping they choose to do it frequently. Dub without end. Ad Infinitum.