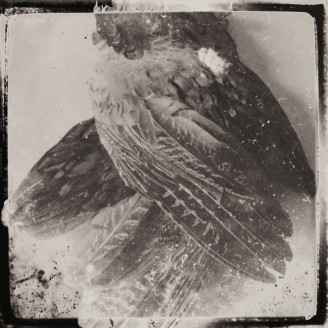 The World Without Us Glissando

Play All LP
It's been four long years since Glissando released the critically acclaimed 'With Our Arms Wide Open We March Towards the Burning Sea' and the duo finally return this November with a new record 'The World Without Us'.

The new material bares Glissando's trademark of ethereal voices and tip-toing piano melodies but the overall sound is richer and more expansive. Epic swells of strings and guitars sore above the drones and field recordings to create an intense yet fragile noise. The dynamics of the new record are also apparent and through the use of an array of guests there is a new depth and ambition to Glissando that portrays the songs in their truest form. 'The World Without Us' moves slowly between dark shadows and into more hopeful territory throughout, it's not afraid to be silent when the moment arrives but it's also capable of enormous, echoing, choral and string crescendoes in one subtle movement. Since Glissando's debut in 2008 Elly May Irving and Richard Knox have experimented with countless different live set-ups and members ranging from simple, more immediate shows as a duo through to a 7-piece group. Never tied to a specific ideal of how to play the material, it enabled the group to tour heavily for a couple of years in the UK and Europe whilst recording a follow-up album but inevitably this process took it toll. Knox began new projects; 'The Rustle of the Stars' (with Frederic D. Oberland of FareWell Poetry) and later A-Sun Amissa (which also features regular Glissando member Angela Chan) which weighed heavily on the amount of studio time he could commit to Glissando.

May 2012 saw the decision of Irving and Knox to finally complete the record they had been tentatively working on for four years and the final stages came together relatively quickly. Knox produced and pre-mixed the record in his own Cloud Blunt Moon studio in Leeds before heading to Paris to complete the final mixing session with Oberland at his Magnum Diva studio.

The material on 'The World Without Us' stretches back the full four years with the likes of The Long Lost and Of Silence which previously featured on a highly limited edition double-A-side single. The title track is also an older song which has been morphed and reworked over the years. The duo knew these songs were too strong to leave off the record and pushed to find ways of hitting the same standard with the newer tracks like 'Companion' which is almost Scott Walker-esque in the vocal delivery, marking a dynamic change in the way Irving is using her voice.

LP is highly a highly limited deluxe package of just 300 and the CD is housed in a 4 panel heavyweight card sleeve with alternative artwork.