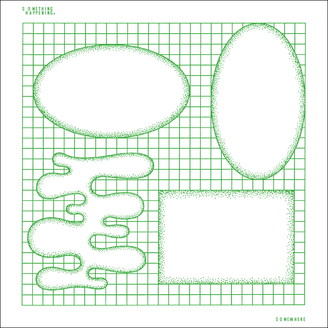 Play All 12"
Living legend Cosmic Force is welcomed on Something Happening Somewhere for an all-out electro affair including a collaboration with national treasures Legowelt and Orgue Electronique. As the name implies, Transmitting Illicit Logic is a tale that can’t be understood solely with our binary brain cells. Reality always escapes the corridors of the mind and fails to be caught in it’s believed opinions and oppositions. Cosmic Force is here to guide you through the maze and helps you to relax these muscles, trading it for a more direct energetic connection that will put you into hyperspace.

Mighty Envy is an unforgiving piece of arp centred electro, pushing the envelope without letting go of the gas pedal. Pulsating bells along the way signal you onto the cosmic runway, there is no space left except to surrender. Haunted By My Past accelerates to even further places. Inspired by EBM it’s a funky dance floor workout in which a sexy AI tells you everything about you you’ve never wanted to know. The great digital escape, you’re trying to make way to the reboot button but finally find out the damn thing doesn’t exist.

In Transmitting Illicit Logic we first encounter an older AI model which got stuck in one of its own created habits and as a consequence is only left spitting out deranging synth arpeggio’s. After we pass him we find a doorway to a hidden bar… the rest is history. Grand Theft Auto meets stripped back robot moves. Finally, we have Silicon Scally remixing Transmitting Illicit Logic, warping you to an even tougher and weirder dimension.