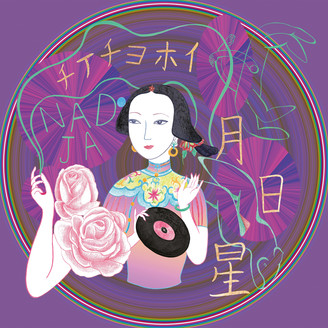 Play All LP
Birds are singing, a soft female voice embraces the stars, then the funk hits the fan: the second album of mysterious Japanese singer Nadja haunts immediately and marks one of the most exquisite reissues in the ever-growing catalogue of Studio Mule. Originally released in 1989 as promo only CD on the Japanese label Polystar, the album features some of the finest eighties pop funk fusion arrangements of the era. A deeply enchanting lost gem, that gets listeners instantly into heavy repeat addiction.

All ten songs are arranged by a group of grandmasters of their art. Japanese saxophonist, composer and music producer Yasuaki Shimizu, man behind the electronic ambient fusion classic “Kakashi”, was in charge for tunes like “Wac-Wack”, a neon light funk pop song, full of soft big city eroticism, ultra-slick synth lines and real funkateer explosions. It’s followed by “夢のとりこ”, the most stirring pop tune on the album, that originally was written by French composer, multi-instrumentalist, actor and singer Areski Belkacem, known for his and long-time collaborations with French avantgarde singer Brigitte Fontaine. Shimizu transformed the song into a low hanging funk jewel, with a cool rolling bassline, dub depth and synths that cry for cosmic help. Above all Nadja signs with a sexy chill, that somehow could only emerge in the 1980ees, when the cold war even made pop music real cool. The follow up is named “真珠のように”, features again music by Belkacem, this time transformed by Shimizu into electronic erotic pop - dreamy, witchy and precisely musical composed.

The B-Side opens with “Velvet Rain”, a funky urban boogie composition by Japanese keyboard player, composer and producer Akira Inoue, enlarged with glimmer camp kitsch, that immediately puts a smile on the listeners faces. It gets followed by “Paradise Catcher”, a soft pop tune with longing string and horn sections, arranged by legendary Jamaican rhythm and production duo Sly & Robbie. It somehow marks one of the strangest songs in their longstanding career, as it is largely minimal orchestral but yet super tight when it comes down to the rhythmic magnitudes. The next tune, “Private Tripper”, also stays soulful, funky and horn driven. Always pleasing the super tight, yet feathery voice of Nadja, that is dancing about boogie grooves and illuminating melodies with a seducing tragical coolness. Finally the album ends with a stylistic break in the overall musical atmosphere. It comes from Japanese musician Hiroaki Goto, it’s called “地図をずっと南へ”and features Afro-Brasilian voodoo rhythms, pan flutes, cosmic piano notes and Nadja, singing like a rain forest sorceress from outer space.

Ten arrangements by a bunch of high-grade arrangers, that all left Nadja’s voice enough space to widespread her talent as a supremely seducing singer, who wrote all lyrics, vocals and chorus by herself in order to present her touching vocal class in a vivid, bewitching timeless style. Come in and get ensnared!