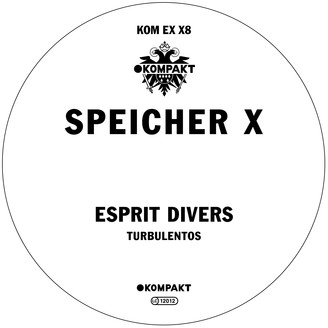 Play All Digital Single
The SPEICHER X series returns with the first single from a new alias called ESPRIT DIVERS, but many of you know him as COYU – the celebrated Catalan DJ and founder of Suara.

“Eclecticism and diversity is something that have followed me since I started to get interest on music. This is why I have decided to split my projects and create Esprit Divers, who will be in continuous motion seeking for different sounds, based in the idea of music of contrast: light and dark, sorrow and hope, mind and soul.”

The result of this new endeavour is called TURBULENTOS. A fortified low slung bass drum is the fuel to propel this techno train forward. TURBULENTOS resonates the earliest days of Kompakt’s sweat drenched clubland Speicher glory, but fits the set demands for the biggest of today’s festival stage DJs.