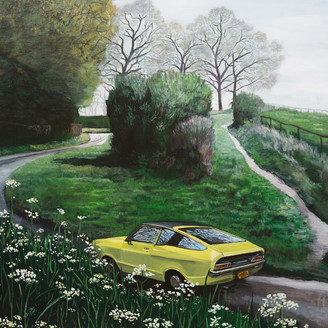 Play All LP
Two Words is the debut release from the duo of Canadian sound artist crys cole and Australian songwriter Francis Plagne. Building on a series of experimental live performances in which the pair toyed with possible common languages for their seemingly unrelated approaches to music, the LP’s two sides present a single piece that brings together abstract texture and slow-motion song in a sonic space where genre cedes to the logic of dreams.

The piece begins with a long, nearly static sequence built primarily from rubbed surfaces, using movement in the stereo field and changing mic placements to create a unified but unstable sonic environment that mimics wind, water, and breath, opening an impossible space between nature and artifice. This artificial outdoors ultimately makes room for Plagne’s electric organ, which sounds a series of melancholic chords to accompany a wandering Wyatt-esque keyboard line as cole’s intimate contact mic textures sizzle and pop in the foreground.

From here the piece makes a surprise detour into song, as the majority of the second side finds Plagne intoning a series of obtuse two word phrases (from a text by Berlin-based poet Marty Hiatt) to an austere organ accompaniment. Working closely with engineer and producer Joe Talia, cole and Plagne extend the studio-as-an-instrument tradition of Teo Macero and This Heat, introducing subtle yet unexpected production shifts that lead the listener from the initial austerity of the organ and voice to an oneiric space of asynchronised vocal doubles, creaking textures, and distant whistling, ultimately arriving at something like an imagined meeting of Organum and Arthur Russell.

Packaged in a suitably mysterious sleeve featuring a lush work by Australian painter Anne Wallace on the front and text by Hiatt on the back, Two Words is both comforting and strange, a disorienting blend of seemingly discrepant elements.