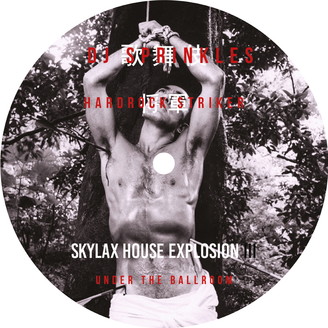 As with each of the vinyl EPs, they make reference to a particular space as it pertains to the formulation of house music. Under The Ballroom is of particular resonance to DJ Sprinkles who, in the early 90s, started out in transsexual sex worker clubs like Sally’s II – where she won an underground grammy for Best DJ 1991 - that were centres for the drag queen ballroom culture that originated in New York City. As with the two EPs before it, Under The Ballroom features tracks personally curated by DJ Sprinkles and Hardrock Striker. Populating the A side is one half of Tuff City Kids, Lauer, who’s catalogued leanings towards more 80s dance music sounds are nearly as old as the SKYLAX label itself. On Bigs, Lauer picks out sounds associated with the earlier end of house music with bass tones from older machines, however manifesting themselves comfortably within the context of Paradise Garage, The Loft and The Ballrooms of NYC, which cumulatively, span the decades between the 70s and 90s. He is joined by 100% Silk Alumni and recent SKYLAX RECORDS signee - and DJ Sprinkles fangirl - Octo Octa, who presents Running, a piece full of what are slowly becoming the signature house sounds of the Brooklyn-based producer; pitched vocals and machine noises that ally with some of her tastes for deep textures, drawing from house as well as her love for drum and bass.

Taking up the entire B-side with Soleil Mauve is Violence FM & The Underground Soulsavers, who are making their production debut as part of the 20 Years of SKYLAX Compilation. Lengthy and saturated in a sparse sewing of jarring vocals, Soleil Mauve is an obvious pick for DJ Sprinkles; utilising it at the end of her mix on Disc 1 of the compilation’s CD. Under The Ballroom makes up the final piece of the SKYLAX RECORDS 20 Years Compilation, but sets a precedent for future projects presented by SKYLAX HOUSE EXPLOSION.

One part of three releases, Under The Loft accompanies Under The Garage and Under The Ballroom as part of the 20 Years of SKYLAX RECORDS compilation.