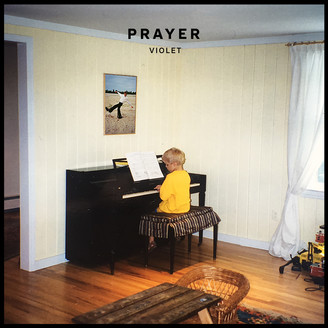 Play All Digital Single
Violet, lying between blue and the invisible ultraviolet, is often ascribed a mystical quality. It is precisely this quality that Nicki Fehr a.k.a. Prayer sought to capture on his debut album which will come out on both tape and as a dwonload/stream on Martin Hossbach on 29 February 2020.

Upon discovering Eastern devotional music, Fehr became fascinated with the idea of recreating it with his own means. He cites the otherworldly space and serenity such music creates, along with its pure intention, as a major influence. Not wanting to imitate or appropriate these sacred traditions, Fehr studied their common denominators and atmospheres while sticking to his own musical vocabulary. The resulting eight tracks on Violet are varied and nuanced, slaloming between pop songwriting (Rose Garden, Bubble Trouble, Leo, Yokai), electronic experimentation (Das Jahr 2359), and purely instrumental compositions (Mooons, Kural, Qutbuddin). Though each song inhabits its own space, all are tied together by invisible threads: Fehr’s sensitivity, his ever so soft voice, and a playfully ethereal sound palette.

Initially a bedroom production, it wasn’t until Fehr moved into a studio at Funkhaus Berlin that the album took on its final form. There, a close-knit community of friends ready to share their skills and equipment provided the album with additional clarity, depth, and analog warmth.

While always rooted in the realm of music, Berlin-based Fehr sees his practice as a holistic endeavour. A special interest in the nature of consciousness, the subversive potential of pop culture, and spirituality in the digital age informs his oftentimes surreal and romantic practice. Whether it be a fragrant vinyl, concert-cinema, or a site- specific mixed media installation; Fehr seeks to create out-of- the-ordinary spaces from which profound personal experiences can emerge.

After growing up in the USA and Germany, Fehr studied media arts and scenography at the University for Arts and Design Karlsruhe. Upon moving to Berlin in 2013, Fehr began working as a composer and performer in dance, theatre and several bands. He has worked at Deutsches Theater Berlin, Schauspielhaus Vienna, Deutsches Theater Göttingen, Künstlerhaus Mousonturm, and Volksbühne Berlin; released music with his avant-pop band ooi on Kitsuné; and is a former live member of bands Lea Porcelain and Jungstötter.