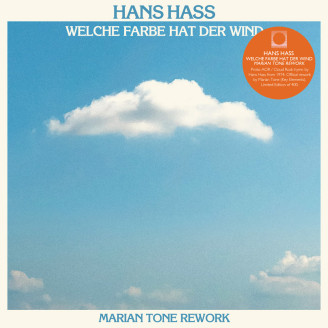 Play All 7"
The Outer Edge is very proud to release another quite sensational release. Here are the official reworks of Hans Hass' proto-AOR / cloud rock hymn "Welche Farbe hat der Wind" (which translates to "What color is the wind").

The main producer for this release was Marian Tone (of Key Elements), who reworked the track almost from scratch. He re-recorded the drums, the bassline, and some chords while keeping Hass's original vocal layer. The distinctive guitar playing by co-composer Gabor Kristof sparkles throughout. The result is exactly what we had hoped and asked for: a DJ-friendly version of this überclassic track.

The idea for this rework project came to mind when label owner DJ Scientist got word from Tobias Kirmayer of Tramp Records that "Welche Farbe hat der Wind" would be officially re-released for the first time on his compilation series "Praise Poems" as well as on a single reissue. Scientist immediately asked if he could make an edit with louder drums to make the track more playable in a DJ set. However, as the masters of the Tramp reissues had already been submitted to the pressing plant, he was granted permission to re-license the track and rework it for his own label instead.

Hence, the reworks feature Scientist's "vintage drums" mix, which has the drums mixed louder, plus drums added at the quite psychedelic and experimental last third, with a few other sound adjustments made.

But it was up to Berlin-based DJ and music producer Marian Tone to put the icing on the cake and rework and enhance the song further with his own version. With fellow Key Elements bandmember Steffen Kieslich, he completely re-recorded the drums. Then it was up to Doron Segal to replay the bass and the keys. What we get is the classic sound of "Welche Farbe hat der Wind" - just updated and fresher.

For the first time ever, the track is also available as an instrumental version. Here, the great original guitar playing keeps the song going and going, and makes it perfectly clear that this tune, which originally came out on the schlager album "Reise in eine glückliche Zukunft" in 1974, is pretty damn funky!

It has been difficult to put "Welche Farbe hat der Wind" into a genre box, But it has been described as "rare groove","psychedelic schlager", and even "proto-AOR". For facility, Scientist has coined the new term "cloud rock" to describe this particular style of soft but groovy music. The name cloud rock bears a conspicuous reference to the krautrock genre as well. More tracks in a similar vein will be heard soon in a DJ mix under the same name.

Marian Tone's rework, as well as the corresponding instrumental version, will be released on a limited 7" single with a full-color picture sleeve. The digital release will feature the DJ Scientist re-mix plus an alternative version that puts more focus on the re-recorded bassline. In any case, this is an essential item for any music lover as well as the ideal contribution to your ultimate "cloud rock" DJ set!