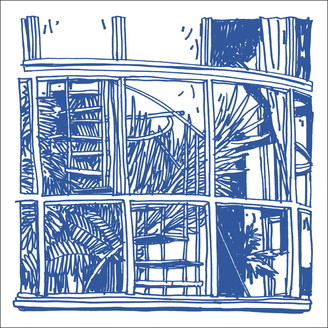 Play All 12"
Wit Bad is the result of a beautiful collaborative project that started with illustrator Joost Stokhof. He was asked as an artist in residence for Amsterdam’s Hortus Botanicus, a place where Joost locked himself up for a week alongside the finest biodiversity in the city. Joost asked Eefje de visser to join him for a day and Eefje asked Nuno dos Santos to form a powerful trinity of which Wit Blad is the unmistakable evidence.

The original version was released in April of 2018 and we finally have a vinyl (only) version to go along with it. On the A side we find an 808 version, which is an extended version by Nuno of the ‘Wit Blad’ original. Zooming in on the drums and bass line while leaving even more space for Eefjes haunting voice. Eefje is one of Holland’s best kept music secrets, her voice is soothing and her presence like a siren song seducing you in. Immersing the music with field recordings, you can hear the birds and surroundings the piece was recorded and even some whispering voices that only add to the atmosphere.

Flipping to the other side we find our dear friend Mattheis remixing Wit Blad in a strong hypnotic vibe. Containing Mattheis’ trademark synth swirls, it’s as soothing as it is driving with spine tingling harmonics slowly creeping in and out.

This all comes packaged in a silkscreen printed cover containing the illustrations that Joost Stokhof made during their time together. The vinyl also includes a small poster including extra images by Joost and the lyrics of Wit Blad. Adding up to a beautiful feast for both the eyes and ears.