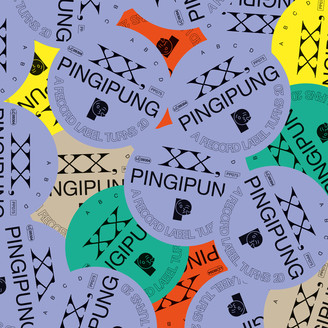 Play All 2x10"
2002-2022, that’s 20 years of Pingipung! The German record label celebrates its anniversary with exclusive tracks by a fine selection of artists from the label roster as well as new names. Instead of looking back at the classics, Pingipung chose to compile a kaleidoscopic preview of possible future directions for the label. The line-up features playfully melancholic songs by Museum Of No Art, Peter Power or The Notwist, an excursion to the desert by RVDS or a psychedelic take on Dub in Tolouse Low Trax’ remix for the Ainu singer Umeko Ando. Artists such as Anadol, Y Bülbül, MD Pallavi & Andi Otto, M.RUX, Sven Kacirek, Schlammpeitziger, Peter Presto and F.S.Blumm are already well known to the Pingipung audience. They contribute exclusive new tracks, adding to their existing output on the label.

It’s impossible to file this compilation under a genre, which is exactly the case with Pingipung in general - bull’s eye. The collection of tracks is pressed in the perfect format to match the Pingipung jubilee: A 2x10’’ vinyl in a gatefold sleeve.