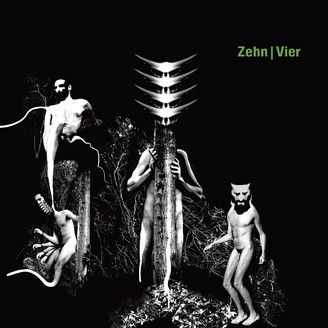 Play All 12"
Ostgut Ton reissues Vier of Zehn with original tracks by Nick Höppner and Virginia as well as Matthew Styles remixing Dinky.

While Gregory Myrgiotis’ artwork may look as if it’s a rather dark record music-wise, the opposite is true: Zehn | Vier comes with three uplifting House tracks. While the CD version of Zehn features the original Dinky production, this 12“ comes with Matthew Styles’ seven-minute Dub mix, the most notable difference being the lack of vocals as well as Styles’ focus on synth pads and piano melodies – “Planes” takes a completely new route with this instrumental version. We all have our crosses to bear, and Nick Höppner carries a double pack: His percussion-heavy contribution is in the vein of his critically acclaimed album Folk (Ostgut Ton, 2015). A different tone and mood is being set by Virginia, whose soulful vocals correspond nicely with the Electro-influenced, percussive and dreamy vibe of “Never Underestimate” – which also serves as an outlook to her upcoming album, out on Ostgut Ton in Spring 2016.