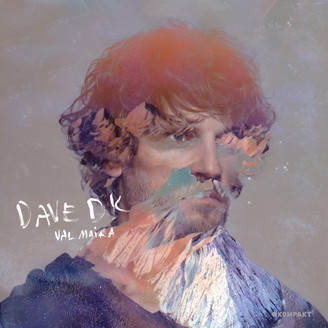 Play All CD
An epic sonic journey crossing classic Kompakt territory - from Pop Ambient to tuneful techno and house -, VAL MAIRA is not just the extended follow-up to DAVE DK's much-adored PALMAILLE 12" (KOMPAKT 277), a release that already stood out for its almost uncanny emulation of Kompakt's more impressionist panoply, but a sonic achievement in its own right - a record as delicate as it is candid, deliberately showcasing all its strengths and dodges, but ultimately - magically - amounting to so much more than the mere sum of its parts. In many ways, VAL MAIRA is the perfect Kompakt record, albeit one that Kompakt never made. Until now.

Dave's third full-length after his 2007 album on Moodmusic and a debut on Müller Records in 2000, this new offering named after a valley in the Italian mountains goes beyond admittedly impressive production skills, aiming for deeply personal expressiveness and emotional impact. From the tender dawning of opener FADE IN to the solid dance chops of enticingly grooving cuts like SMUKKE LYDE, NUEVA CANCION or COOLETTE, the record's preoccupation with the mutual dependencies of harmony and discord is quickly revealed: "I've tried to create an interlocking atmosphere of merriment and melancholy for the full duration of an album", says the producer, not withholding his intention to create something beautiful: "I hope that one can hear a little bit of hope in the tracks, like everything's going to be fine."

You might be forgiven for taking this as a massive understatement, coming from someone who seems to know a fair deal about that elusive something called human warmth. "Although you can be incredibly creative thanks to limitless digital means, I think that the biggest challenge lies in creating a link to something human, generating feelings of warmth that reach and move the listener", says Dave - painting the picture of a highly reflective artist that spends much time with fine-tuning the emotional registry of his pallet, laboring vigorously over the concept of a track as he does over its sound design: "before anything else, I need an idea and a general notion of the development of a track - just jamming doesn't work well for me." All the more surprising how all this planning and thinking translates into something as organic sounding and nearly self-emergent as HALMA, VEIRA or WHITEHILL, the latter featuring the distinctive (and decidedly human) vocals from PIPER DAVIS of Stimming fame.

One could very well describe these tracks as both intimate and sociable at the same time, a rare combination that might also account for the vivid sonic storytelling present in cuts like KRONSEE (referring to an actual lake near Dave's birthplace) or WE MIX AT SIX, the synaesthetic retelling of a delayed party at the beaches of Barcelona, where someone spray-painted the title's vital information on a t-shirt swaying in the summerly breeze. Heavily influenced by film soundtracks, drone sounds and organic noise, DAVE DK obviously feels very close to the perpetual atmospheric hum in between sounds, finding hooks and grannies in the tiniest nooks and crannies - and to hear these eleven tracks lovingly intertwining their inspirations while seemingly creating nutrient-rich textures and meaningful melodies out of thin ether remains a riveting experience even after the nth play-back.