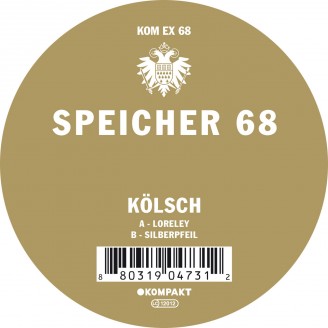 Kompakt welcomes a force to be reckoned on the fitting home of Speicher - Denmark's Rune Riley Kölsch. How appropriate that this talent was bestowed the (real) same name of the liquid gold that cascades from the taps of local watering holes in the city of Cologne? It's a matrimony made in heaven we say. His series of 12” releases under the guise of Ink & Needle on Tattoo Rec are cherished here at Kompakt. Tried and tested by Michael Mayer through his relentless touring throughout the summer, “Lorelei” has proven to have been a highlight. Though 4 to the floor, the spirit of Schaffel permeates Kölsch's utterly epic tune. This synth ride showers one's spirit and soul as refreshingly crisp and cool as the first gulp of Kölsch beer on a hot summer's day. The flipside “Silberpfeil” retains the simple playfulness that crests and builds with the single's partner track but straddles a deeper concoction of melody and harmony.